Washington D.C. – It was reported today that Rockville, MD native Daniel M. Snyder has just completed a decade-long fantasy camp with the Washington Redskins.  Snyder, a self-purported life-long Skins fan said, “Attending camp and rubbing shoulders with all the coaches and players for the last 14 years was a dream of a lifetime.”

As part of the contest winnings, Snyder, a media mogul and CEO of Snyder Communications in Bethesda, embedded with the team since the summer of 1999 and was granted unlimited access to all aspects of the football operations.  When asked to recall the top five experiences with the Skins, Snyder listed them as follows:

Number Five:  Unfettered access to the team.  “They gave me an office in Redskins Park and told me as part of the team’s open door policy, any player could come in and discuss any football matter with me at any time.  It was like I was doing the head coach’s job without the accountability for winning and losing!”

“I got my shorts and tee shirt and felt just like a coach out there.  Once I even had a whistle and refereed a seven-on-seven scrimmage with the Ravens!”

Number Three:  Talking Xs and Os with Joe Gibbs.  “The coach and I sat down and he taught me everything I know about how to watch film and game plan.  We even prepped for the scouting combine in Indy one year!”

Number Two:  Learning how to litigate.  “This one lady, I think she was a grandma, couldn’t afford her season tickets, so the legal department let me sign the letter taking her to court to recover our losses – it was awesome!”

Number One:  BFFs with RG3. 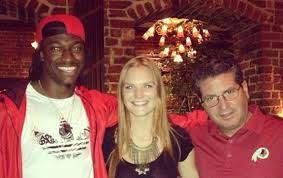 “It is so cool when you can hang with the Heisman Trophy winner and his fiancee.  Rebecca, me, and Robert, we fly on the corporate jet, go out to dinner, and just chill.  My friends think I have this incredible life and are so jealous.”

Connect with All About DC Sports

Avid sports fan and golf nut. I am a lifelong resident of the Washington D.C. area and love to follow the local teams. Also worked as a golf professional in the Middle Atlantic PGA for several years and am intrigued by the game to no end. I love to play and practice and am dedicated to continual improvement.
View all posts by Brian Penn →
This entry was posted in Redskins and tagged Dan Snyder, football, Joe Gibbs, Mike Shanahan, NFL, Redskins, RG3, sports. Bookmark the permalink.